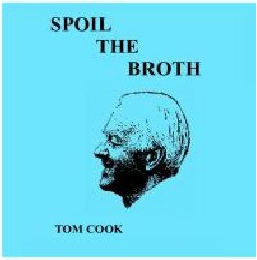 For Tom a dance became a Dance when its association with a particular tune was so close that either immediately suggested the other, in the way that Song is the combination of special tunes and special words; put differently and to quote Imogen Holst,
“Dancing is Music made Visible”.

Tom's association with Brian Jenkins by means of the Neston Folk Club is legendary and as fast as Brian wrote new tunes Tom illustrated them with new dances.

A member of the Folk Dance Band the Cracknels, Brian Jenkins writes tunes in the métier of Folk on the most unlikely of subjects. It is not all of us who get inspiration from such commonplace themes as the Double Bend in a road!!

Together, Spoil the Broth is a collection of their finest.

The book also has notations for the following:

She Rose and Let Me In

A collection of tunes by Brian Jenkins for dances composed by Tom Cook, played by the Cracknels.