In the Fourth Volume in the Pride and Prejudice Collection we have brought together a selection of beautiful tunes and dances from 18th and 19th Century, the majority being from the period 1790 to 1815.

One of our dance Interpreters, Reg Battle, was lucky enough to be given a hitherto un-interpreted book of dances published in 1815; and we have included three of those dances.
We are pleased to introduce to you a new dance Interpreter, Peter Hoffmann from Germany, who brings us dances from collections published during the period of Jane Austen’s working life.

As in the previous Volumes, David Fleming-Williams has mostly used the tunes as they were originally printed for each dance, arranging them in a style which is just as easy to listen to as dance.
In the same manner, Reg Battle and Peter Hoffmann have re-interpreted some of the dances, trying to get back more closely to ‘how it might have been’, bearing in mind the expectations of today's dancers.

This is a Multi-Media CD - so if you have a computer you can see and print both the dance notations and the music notations. Also included are the original notations and interesting ‘tit-bits’, such as how the dance was performed in the TV or film production.  The ‘Download’ version also includes the dances and music as ‘pdf’ files.

File (in MP3 form, with PDF of the Dance Notations and Music Notations) 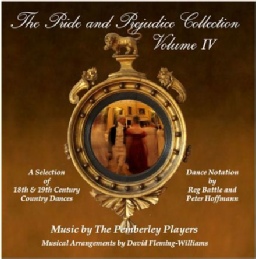